It is noted under the main Page that NICL is the business arm of Mataqali Navusalevu. Furthermore, Mataqali Navusalevu had its first ever Family Fun Day in 2009. Between 2010 and 2014, both NICL and the Mataqali got on cruise mode – NICL continued to earn dividends from its investments, and a number of Mataqali members operated their own family stalls to sell handicrafts and other merchandise to tourists regularly visiting Dravuni by tourist liners that ply the Pacific Ocean.

In 2014, the Mataqali members on Dravuni, as against those in Suva, changed direction. They had consultations and decided to engage in development projects that closely touch their lives.  This coincided with the return of Iliesa Bula of Tokatoka Saumualailai to the village having retired from the Police Force at 55 years old. Iliesa was able to provide the effective and transformative leadership needed to rally the Mataqali members and get them to raise funds and collectively determine the kind of projects they needed.

At a meeting in the village on 10 October 2014, the Mataqali members prioritized their own projects, viz: (i) flushed toilets/shower units; (ii) repainting of houses; (iii) improving water catchment to supply the two concrete reservoirs that supply the whole village; and (iv) solar energy for every house.

Additionally, there will be competitions every year on the best and cleanest house/home and for which prizes will be awarded. Furthermore, Mataqali members will attend to large family projects, e.g. establishing a new plantation, collectively (solesolevaki).

At the time of writing this post, Mataqali Navusalevu members have concluded the first two projects, mentioned above, and are attending to the third project.

The pictures below show some of the finished flushed toilets and/or shower units. 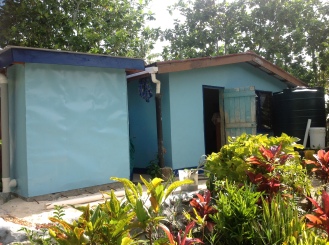 Like all good projects, there are risks to contend with. With flushed toilets in an island setting, the risk of course is that if the septic tank system fails, then we risk not-fully processed liquid seeping into the sea and will destroy the asset – the maritime environment, we dearly value.

Mataqali Navusalevu is very much aware of the risks involved. It is pursuing and considering ways and means to address these. The first is using the design of flushed toilets approved by the Ministry of Rural and Maritime Development. Secondly, the Mataqali has started a conversation with the relevant Minister on the prospect of constructing a well-designed collective sewerage system for the whole village. Thirdly, the Mataqali is also investigating a motorized septic tank system, powered by solar energy and the final product of the system is almost pure water that can be used to irrigate vegetable plots.

The Mataqali envisages that one motorized unit can serve 4-5 houses; and these houses can engage in their collective vegetable plots to service the hotel on nearby Yaukuve Levu and that which is being considered on Namara Island, opposite the lagoon from Yaukuve Levu.