Lloyd Geering (‘From the Big Bang to God’, 2013) placed ‘stories from the past’ in their proper perspective in the context of noosphere, the world of human thought. Geering adds, “The noosphere is both a human activity in which we participate and a body of human knowledge with which we have a symbiotic relationship. It continually shapes us and we continue to construct and reshape it”. Such construction and reshaping have contributed to the evolution of the human species.  Geering further adds: “And collections of stories are exactly what we find at the heart of the body of knowledge being handed down orally in tribal cultures and being committed to writing in the ancient centres of civilization”.

Charles Montgomery, in ‘The Shark God’, 2006, defines myth (stories from the past) as: ‘A story, often involving the expression of supernatural power that explains its believers’ relationship with the world’. He adds: “They may not have contained historical truths, but they were nonetheless vital ingredients of civilization”.

Furthermore, Fijian nomenclature has a certain logic which still applies today. I am, for instance, named after my mother’s father – maternal grandfather; and as such, I can be referred to in some circle of relatives as Tukana – implying, affectionately, that I am named after the grandfather of the person speaking.  That sobriquet however tends to be used freely by others within the extended family. With some other members of the extended family and beyond, I am referred to as Tamai Mereia – father of Mereia, my eldest. This form of address is used by those who regard calling me by my name directly as disrespectful. 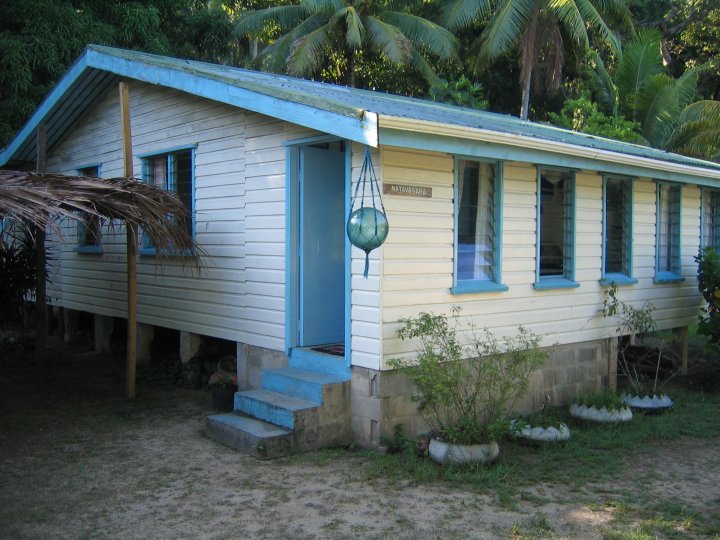 As the patriarch of the Natavasara clan (Natavasara being the family yavu or house foundation on Dravuni), I am also referred to as iTaukei Natavasara – owner of the yavu Natavasara. I have inherited this title from my father. Had my older brother been living today, he would have inherited that title instead of me. Another title I have inherited from my father is ‘Mata i Burebasaga’ – the herald to the vanua – confederation of Burebasaga, whose paramount chief is currently the Marama Roko Tui Dreketi, Ro Teimumu Kepa. This family title has been passed down from my ancestors. If I were engaged in ceremonies away from Dravuni or Buliya and I was the only representative of my yavusa present, I would be addressed as Ramalo or Tunidaunibokola – the icavuti (honorific) for the chief of the yavusa, even though I have no direct claim to the title. This is practised for reasons of respect, acknowledgement, honour, homage and acclamation.

Similar nomenclatural practices would have been applied with Ravuravu . Sobriquets and other forms of address and title conferred on him would indicate his ancestry, mastery, extent of authority and physical superiority.

Qarikau, for example, was a reference to a giant of a man, physically strong and a warrior of exceptional ability. Taukei ni Yavu and Tui ni Vanua are honorifics indicating owner or lord over lands. The Waimaro title would have resulted after the allotment of all the Fijian lands amongst the various chiefs when the exodus from Nakauvadra took place. Meo writes: “Tuiwai (an ancestral name)….had his clan split up….Some settled in Wailiko, Waimaro, Wainivesi, Waibula, Waidalice, Wainibuka, Wainimala, Waidina. They were the largest clan in Viti and their chiefs became Tui, Vunivalu, Ratu, Sauturaga and some were Bati and their common name or title was Waimaro or kai Waimaro……Because of their large number they later spread throughout Viti”.

Tuiwai also known as (aka) Tiboti indicates lineage from Degei II, Degei’s eldest son. Degei II carried the honorifics: Masi Ratu, Ramasi, Taukei ni Yavu and Catanatamani II.  Catanatamani II was a title that he shared with his father, Degei (Senior). The title was conferred on the senior Degei because of his allegiance to a different god not favoured by his own father, Tura.

Tura, aka Turaga and Turaitolu, earned the title Catanatamani in the first place. It is a reference to being the male twin of the Tomanaivi (see below) – a boy that was afraid and hid in the vadra (pandanus).  Tura fathered both Lutunasobasoba and Degei but from different mothers.

Tuiwai and Tura came to Fiji on the ‘Rogovoka’ – the first boat that brought the first group of ancestors about 3,500 years ago. His father, Degei Senior, came with Lutunasobasoba on the ‘Kaunitoni’, the second boat that arrived with the early ancestors.

Stories told of the first ancestors who arrived on the ‘Rogovoka’ revealed that they were giants. Meo writes: “It was believed that these islands (Viti) were first inhabited by giant-like people who were tall, big with strong physique…….it was believed to be the offspring of the ancestral god called Ratu mai Bula and they came from the horizon”.  The belief that early ancestors were giants, being offsprings of the gods, was common amongst early ancestral communities.  In the same reference above, Geering cited an example from the Bible that reflects such a belief. Geering went further. He said that the text from Genesis 6: 1-4 was the remnant of primitive polytheistic story that predated the monotheistic stories of the Bible.

The text reads: “When people had spread all over the world, and daughters were being born, some of the heavenly beings saw that the young women were beautiful, so they took the ones they liked………In those days, and even later, there were giants on the earth who were descendants of human women and heavenly beings. They were the great heroes and famous men of long ago.”

Ravuravu’s ancestry account up to this point can be said to aptly cover the period of the last 3,500 years, up to the point when the first ancestors arrived in Fiji. Before that, it is impossible to give any reasonable account whatsoever.  Fijian migration stories are consistent in that our early ancestors all originated from Africa. The derived timelines of the migration and speed are questionable. But the origin of the migration is compatible with the accepted ‘Out of Africa’ migration theory that started about 100,000 years ago (see Geering).

The early ancestors did not have the capability nor the gumption, to map out their ancestry during the period when their own ancestors left Africa to the time when they got to Fiji – about 96,500 years. It would be nigh impossible, in any case, even for any living community today to compile information on layers and layers of generations, even with the aid of modern technology. The early ancestors did the most sensible thing and that was to ignore all subsequent ancestors but went right back to the single common ancestors in their attempt to explain away the period that had lapsed. Many ancestral communities tend to have stories from the past, creation stories, which are the equivalence of the generally-accepted Mitochondrial Eve from about 150,000 years ago in Africa.  The Fijian ancestors had in Tomanaivi their equivalence of a Mitochondrial Eve.

Ancestral God, Ratu mai Bula, created a man and a woman in wedlock and gave them a common name, Tomanaivi. They lived in a garden where Ratu mai Bula had planted a vudi plant (plaintain) with the umbilical cords of the twins –boy and a girl, born to the Tomanaivi. Ratu mai Bula’s instruction to the Tomanaivi was that the first crop of the ‘vudi’ to be presented to him as ‘first crop’. This however did not happen since the mother of the twins gave the first crop to the twins when they were hungry one day and the bunch of ripened fruits was beckoning. Mother and twins became aware of the wrath that awaited them and they fled to the mountains and hid there. Ratu mai Bula, all-knowing and all-seeing ancestral god, found them and meted out appropriate punishments. The male twin became Catanatamani aka Tura.

As we have seen from above, Tura fathered, Degei, from his second wife. Degei fathered Degei II who continued his alienation from his grandfather Tura by continuing to serve his father’s new god. When Degei II became deified as the ancestral god for the early ancestors, he was often referred to not as Ratu mai Bula but Ratu mai Bulu that carries the meaning of god of the spirit world.

The impact of Christianity

The Tomanaivi creation story can be seen by some as straight out of the Garden of Eden of the Old Testament and the man and woman committing the cardinal sin/original sin and being banished ending the life of comfort that they had enjoyed.

It is conceivable that the early missionaries in Fiji had a hand in shaping the final version of this creation story. It is general knowledge that the missionaries in Fiji did encourage and compile early creation and migration stories to establish where the Fijians had come from. Charles Montgomery, quoted above, offers the view that missionaries in the Pacific were helped in their work by explaining religion in terms of how people conceived and related to reality, the basis of which was already embedded in the people’s traditional and cultural belief systems. All the missionaries had to do was to superimpose the biblical god onto the existing belief system.

In Meo’s book, it is noted that the ancestral god of the Fijians, Ratu mai Bula, had become the biblical god who intervened during the construction of the Tower of Babel by getting all the builders to speak different tongues creating confusion. He then dispersed the people to all corners of the globe, some of whom arrived in Fiji several millennia later.

The passage of time from Africa to Viti

Over 96,000 years had to be accounted for. The languages had to be developed, for instance. Social structures , orders and skills had to evolve.  The human species was still developing. Homo sapiens then still needed another 56,000 years or so to develop the physical anatomy and physiology similar to the present homo sapiens.

There would have been setbacks that slowed their developments and progress. These early ancestors would have experienced, for example, the super volcanic eruption of Mount Toba of Indonesia some 70,000 years ago. The eruption “plunged the planet into a dark winter that lasted six to eight years and led to a further thousand years of cold weather” (Geering). Some of the early ancestors obviously survived to multiply and continue their journey.

There were long stop-overs along the way. They came out of Africa essentially as hunters and gatherers and then had to adapt to more sedentary lifestyle with engagements in agriculture for instance. Experts estimate this to have happened about 10,000 years ago. Then they had to adapt to sailing to cross large expanses of oceans.

Fijian migration stories point to reverse migration from the central/south eastern European continent back to Africa due to famine. This is conceivable especially after an event like the Mount Toba eruption. At the time, the early migrants would have developed in their collective memory that the place they had left behind did have food galore, and that they would benefit from going back. They did not know what was ahead of them because they had not experienced it.

These migration stories also relate anecdotes of early ancestors having to learn some agricultural practices in transit in what was Ceylon. It can be assumed that the transition from being nomadic to being agriculturalists would have been made there and then.  This indicates that the early ancestors got to Ceylon about 10,000 years ago, i.e. after the glacial age lifted and after being on the road for about 86,000 years; and they still needed another 6,500 years to reach their final destination. From these timelines, it can be concluded that the Ceylon-Fiji sector of the journey took much less time than it took them to get from Africa to Ceylon. Mastery of sailing canoes for the rest of the journey, inter alia, would have contributed to that.